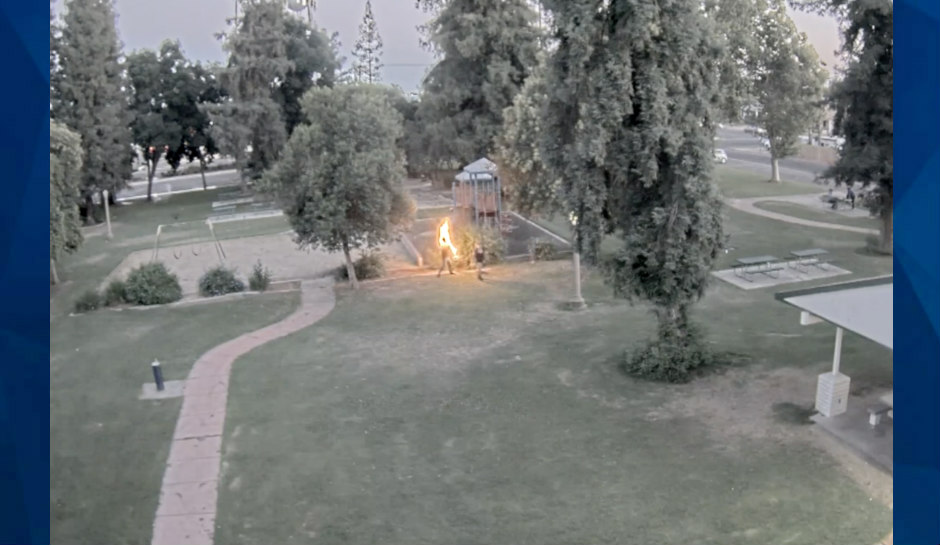 Disturbing new video shows the moment a California woman doused a man with flammable liquid and then set him on fire, reports KMPH-TV.

The incident happened last Thursday at a park in Sanger, Calif., near Fresno. Authorities allege that Patricia Castillo, 48, approached the victim while he was sitting on the grass and threw gasoline at him.

An argument ensued and Castillo lit a lighter, causing the man’s clothes to catch fire.

Footage from a security camera recording appears to show Castillo repeatedly trying to ignite the man’s clothing. In several instances, she steps forward and a flash or flame can be seen near her hand, prompting the man to step back. This repeats several times until the man’s clothes catch fire.

“The video shows Castillo approaching the victim and throwing liquid from a cup on [him] and she and the victim appear to be arguing before Castillo lights a lighter and sets the victim on fire,” the Sanger Police Department wrote in a Facebook post.

Police and medics responded to the scene around 9:15 p.m. and the victim was rushed to a local hospital with serious but not life-threatening injuries; he is expected to survive.

Prosecutors have charged Castillo with attempted murder, arson and conspiracy, according to the police department.

Officers also arrested 43-year-old Leonard Hawkins on charges of supplying Castillo with gasoline. Both Castillo and Hawkins were incarcerated in Fresno County Jail, according to CBS News.

It is unclear whether the victim knew Castillo before the incident or what may have triggered the attack.

The police continue to investigate what happened.

For the latest true crime and justice news, subscribe to the “Crime Stories with Nancy Grace” podcast.

Join Nancy Grace for her new online video series designed to help you protect what you love most: your children.